During its first year of operation, Frankie managed to win the hearts of foodies indowntown Athens and to claim the Best Newcomer award, among the most-lovednew restaurants in town. With a name inspired from Frank Sinatra, an Italian-influenced cuisine and fresh local ingredients, it welcomes you at its new locationin Nea Erythraia, ready to amaze you once more with its fresh, homemade pasta,meat cuts, sourdough bread and pizza, kneaded and baked daily in our woodoven, as well as gluten-free and lactose-free suggestions. 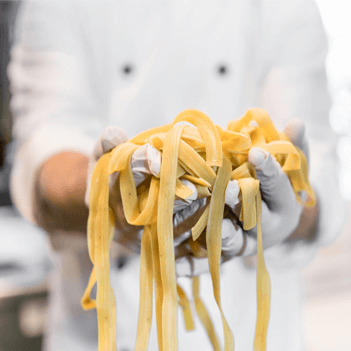 All our fresh pastas are handmade in small quantities in Frankie’s kitchen in Athens, using free-range eggs and the finest organic flour. Our Head Chef Panagiotis Moisis has been perfecting Italian recipes through professional experience in the years, constantly researching and experimenting to create always new and tastier types of pasta. Spaghetti alla chitarra, striftari, tagliatelle, black linguini or gluten-free penne are made freshly every day as part of our à la carte menu and are lactose and sugar free.

Dedicated to sustainable and environmentally conscious cuisine, the restaurant features a Sicily-inspired flair for old-word recipes, authentic delights and signature dishes with the group’s authoritative interpretations of classic and farm-to-table dishes perfectly homemade and hand-crafted.